Groupon founder Andrew Mason’s audio tour startup Detour has been sold to Bose. The acquisition, which involves only the software and tour content – not the team – was quietly announced on Detour’s blog a few days ago, followed by an email to customers. Bose, initially, seems like an unlikely acquirer for an app designed to help people discover a city through narrated walking tours. But its interest in the product has to do with its upcoming AR platform, which involves audio experiences delivered through a pair of sensor-laden glasses.

Bose is now “actively looking for a partner to host the Detour content,” and make it available to its customers, including those on Bose AR.  The Detour app itself will soon shut down.

Mason says he may help Bose a bit in the process of finding that third party, but his focus is on his new company, Descript.

Detour had launched a few years ago, and was entirely self-funded by Mason. Its goal was to offer tourists and locals alike a way to discover a city’s hidden gems, like its off-the-beaten-track shops and alleys – things other tours would overlook. The service arrived to the public with tours in San Francisco starting in 2015, before later expanding to other markets, including international destinations, all available as in-app purchases.

The app, at the time of sale, had around 120 available tours. 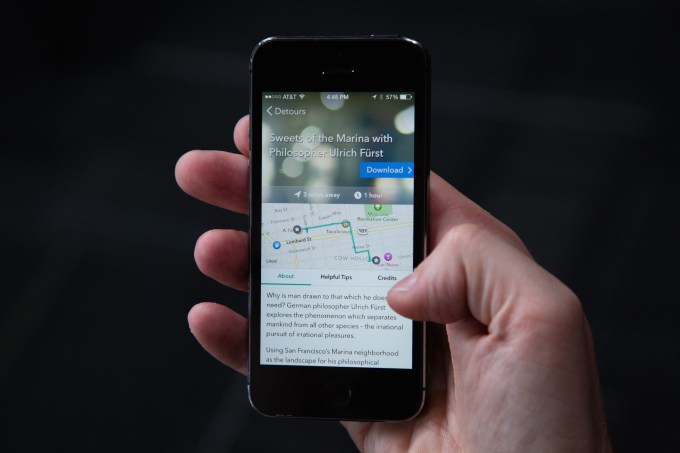 A tour of the Marina’s sweets shops in Detour, narrated by a German philosopher

As part of the creation of its tours, Detour had also developed some interesting technology – like a tool to transcribe audio that lets you edit the audio file by editing the written transcription, and a way to add music and sound to a narrative by adding it to the transcription.

This technology has now been spun off as a new startup, Descript. The Detour team, including Mason, have been working on Descript for around six months now. Descript, which aims to make editing sound files as easy as editing a Word document, launched in December with $5 million in funding from Andreessen Horowitz.

Given Mason’s current focus, it’s not surprising that Detour was shutting down. But it is a little surprising it found an acquirer.

The app was never able to gain a sizable following on the scale of other travel guides. (It had been ranking in the 400’s to 700’s in the App Store’s “Travel” category as of late – meaning, practically invisible.) However, its tours were unique and interesting and had been designed with features others at the time lacked – like location awareness or the ability to sync with multiple people in a group, for example.

The Detour app will remain available until May 31, 2018, and all tours will be free through then. Afterwards, the app will be removed from the App Store.

“Thank you to the producers, engineers, designers, and storytellers that made Detour what it is over the last four years. I’m excited to see where Bose takes it,” wrote Mason, on Detour’s blog.

“Detour is self-funded (by me) and we never disclosed how much,” he says. But he did confirm that Mihir Shah, a friend, had invested a “some token number of thousands of dollars in the very beginning,” which is why the investment is listed on Shah’s LinkedIn.

Deal terms were not available, but it was likely a small exit.

It’s unclear when Detour would arrive on Bose AR, as Bose is still in the process of finding a third party to continue with Detour, and hasn’t yet shipped test builds of its AR glasses to developers.