Twitter, Vine, Voxer, MessageMe. Facebook has repeatedly cut off competitors from its feature for finding your Facebook friends on their apps…after jumpstarting its own social graph by convincing people to upload their Gmail contacts. Meanwhile, Facebook’s Download Your Information tool merely exports a text list of friends’ names you can’t use elsewhere.

As congress considers potential regulation following Mark Zuckerberg’s testimonies, it should prioritize leveling the playing field for aspiring alternatives to Facebook and letting consumers choose where to social network. And as a show of good faith and argument against it abusing its monopoly, Facebook should make our friend list truly portable.

It’s time to free the social graph — to treat it as a fundamental digital possession, the way the Telecomunnications Act Of 1996 protects your right to bring your phone number with you to a new network.

The two most powerful ways to do this would be for Facebook to stop, or congress to stop it from, blocking friend finding on competitors like it’s done in the past to Twitter and more. And Facebook should change its Download Your Information tool to export our friend list in a truly interoperable format. When you friend someone on Facebook, they’re not just a name. They’re someone specific amongst often many with the same name, and Facebook should be open to us getting connected with them elsewhere.

While it continues til this day, back in 2010 Facebook goaded users to import their Gmail address books so they could add them as Facebook friends. But it refused to let users export the email addresses of their friends to use elsewhere. That led Google to change its policy and require data portability reciprocity from any app using its Contacts API.

So did Facebook back off? No. It built a workaround, giving users a deep link to download their Gmail contacts from Google’s honorable export tool. Facebook then painstakingly explained to users how to upload that file so it could suggest they friend all those contacts. 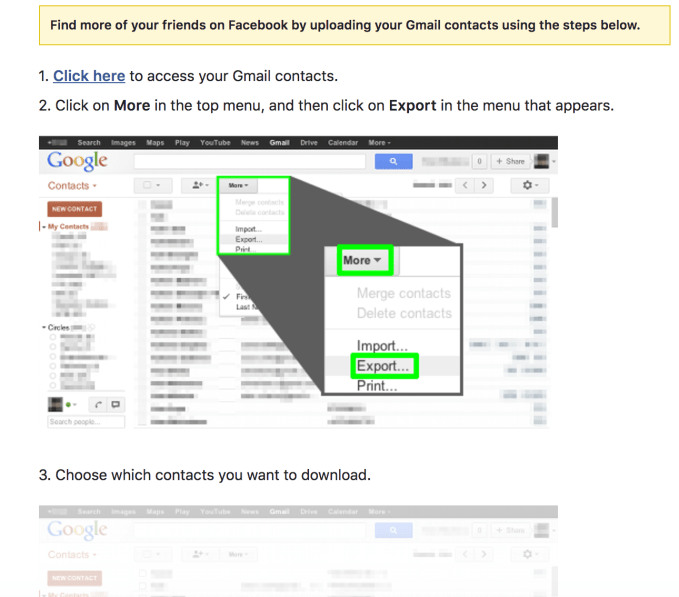 Google didn’t want to stop users from legitimately exporting their contacts, so it just put up a strongly worded warning to Gmail users: “Trap my contacts now: Hold on a second. Are you super sure you want to import your contact information for your friends into a service that won’t let you get it out? . . . Although we strongly disagree with this data protectionism, the choice is yours. Because, after all, you should have control over your data.” And Google offered to let you “Register a complaint over data protectionism.”

8 years later, Facebook has grown from a scrappy upstart chasing Google to become one of the biggest, most powerful players on the Internet. And it’s still teaching users how to snatch their Gmail contacts’ email addresses while only letting you export the names of your friends unless they opt-in through an obscure setting because it considers contact info they’ve shared as their data, not yours. Whether you should be allowed to upload other people’s contact info to a social network is a bigger question. But it is blatant data portability hypocrisy for Facebook to encourage users to import that data from other apps but not export it. 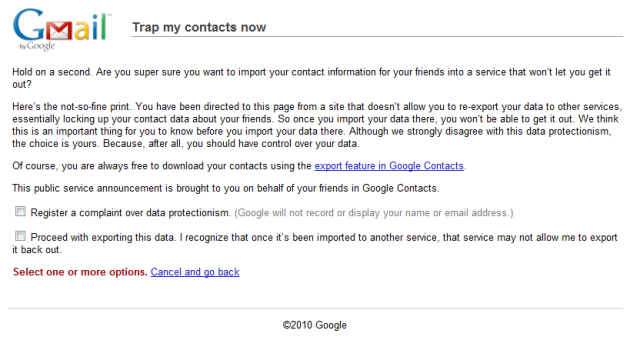 In some respects, it’s good that you can’t mass-export the email addresses of all your Facebook friends. That could enable spamming, which probably isn’t what someone had in mind when they added you as friend on Facebook. They could always block, unfriend, or mute you, but they can’t get their email address back. Facebook is already enduring criticism about how it handled data privacy in the wake of the Cambridge Analytica scandal.

Yet the idea that you could find your Facebook Friends on other apps is a legitimate reason for the platform to exist. It’s one of the things that’s made Facebook Login so useful and popular. Facebook’s API lets certain apps check to see if your Facebook Friends have already signed up, so you can easily follow them or send them a connection request. But Facebook has rescinded that option when it senses true competition. 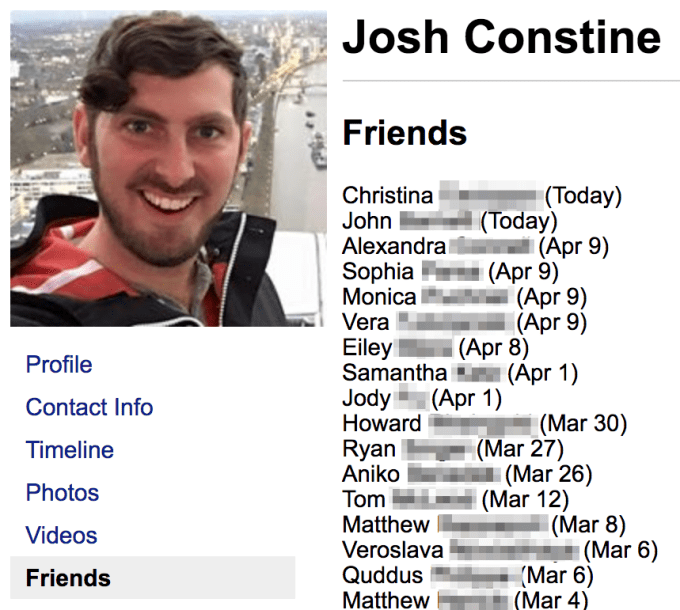 Twitter is the biggest example. Facebook didn’t and still doesn’t let you see which of your Facebook friends are on Twitter, even though it has seven times as many users. Twitter co-founder Ev Williams, frustrated in 2010, said that “They see their social graph as their core asset, and they want to make sure there’s a win-win relationship with anybody who accesses it.”

Facebook went on to establish a formal policy that said that apps that wanted to use its Find Friends tool had to abide by these rules:

Essentially, apps that piggybacked on Facebook’s social graph had to let you share back to Facebook, and couldn’t compete with it. It’s a bit ironic, given Facebook’s overarching strategy for years has been ‘replicate core functionality”. From cloning Twitter’s asymmetrical follow and Trending Topics to Snapchat’s Stories and augmented reality filters, all the way back to cribbing FriendFeed’s News Feed and Facebook’s start as a rip-off of the Winklevii’s HarvardConnection.

Restrictions against replicating core functionality aren’t unheard of in tech. Apple’s iOS won’t let you run an App Store from inside an app, for example. But Facebook’s selective enforcement of the policy is troubling. It simply ignores competing apps that never get popular. Yet if they start to grow into potential rivals, Facebook has swiftly enforced this policy and removed their Find Friends access, often inhibiting further growth and engagement. 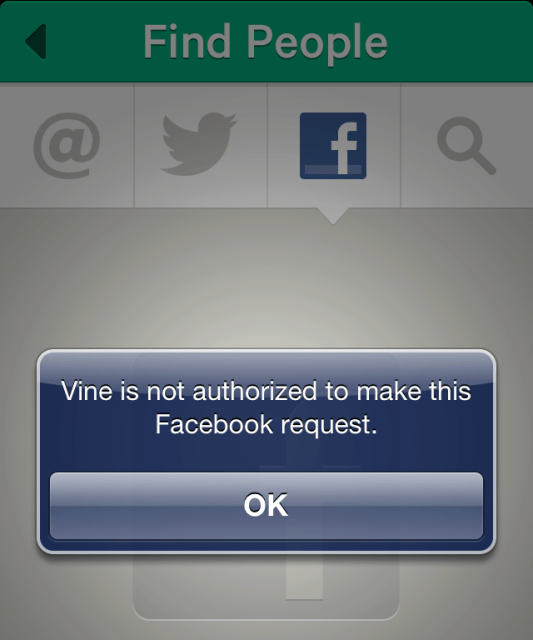 Here are few of examples of times Facebook has cut off competitors from its graph:

As I wrote in 2013, “Enforcement of these policies could create a moat around Facebook. It creates a barrier to engagement, retention, and growth for competing companies.” But in 2018 amongst whispers of anti-trust action, Facebook restricting access to its social graph to protect the dominance of its News Feed seems egregiously anti-competitive.

That’s why Facebook should pledge to stop banning competitors from using its Find Friends tool. If not, congress should tell Facebook that this kind of behavior could lead to more stringent regulation.

When Senator John Neely Kennedy asked Zuckerberg this week, “are you willing to give me the right to take my data on Facebook and move it to another social media platform?”, Zuckerberg claimed that “Senator, you can already do that. We have a Download Your Information tool where you can go get a file of all the content there, and then do whatever you want with it.” 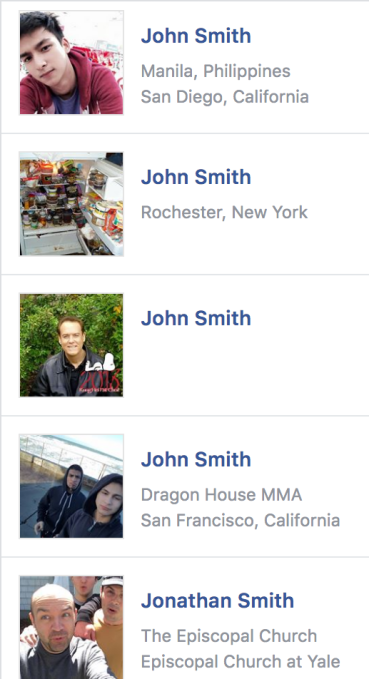 But that’s not exactly true. You can export your photos that can be easily uploaded elsewhere. But your social graph – all those confirmed friend requests — gets reduced to a useless string of text. Download Your Information spits out merely a list of your friends’ names and the dates on which you got connected. There’s no unique username. No link to their Facebook profile. Nothing you can use to find them on another social network beyond manually typing in their names.

That’s especially problematic if your friends have common names. There are tons of John Smiths on Facebook, so finding him on another social network with just a name will require a lot of sleuthing or guess-work. Depending on where you live, locating a particular Garcia, Smirnov, or Lee could be quite difficult. Facebook even built a short-lived feature called Friendshake to help you friend someone nearby amongst everyone in their overlapping name space.

When I asked about this, Facebook told me that users can opt-in to having their email or phone number included in the Download Your Information export. But this privacy setting is buried and little-known. Just 4 percent of my friends, centered around tech savvy San Francisco, had enabled it.

As I criticized way back in 2010 when Download Your Information launched, “The data can be used as a diary, or to replace other information from a hard drive crash or stolen computer — but not necessarily to switch to a different social network.”

Given Facebook’s iron grip on the Find Friends API, users deserve decentralized data portability — a way to take their friends with them that Facebook can’t take back. That’s what Download Your Information should offer but doesn’t.

This is why I’m calling on Facebook to improve the data portability of your friend connections. Give us the same consumer protections that make phone numbers portable.

At the very least Facebook should include your friends’ unique Facebook username and URL. But true portability would mean you could upload the list to another social network to find your friends there.

One option would be for Facebook’s export to include a privacy-safe, hashed version of your friends’ email address that they signed up with and share with you. Facebook could build a hashed email lookup tool so that if you uploaded these non-sensical strings of characters to another app, they could cross-reference them against Facebook’s database of your friends. If there’s a match, the app could surface that person as a someone you might want to reconnect with. Effectively, this would let you find friends elsewhere via email address without Facebook ever giving you or other apps a human-readable list of their contact info.

If you can’t take your social graph with you, there’s little chance for a viable alternative to Facebook to arise. It doesn’t matter if a better social network emerges, or if Facebook disrespects your privacy, because there’s nowhere to go. Opening up the social graph would require Facebook to compete on the merit of its product and policies. Trying to force the company’s hand with a variety of privacy regulations won’t solve the core issue. But the prospect of users actually being able to leave would let the market compel Facebook to treat us better.

For more on Facebook’s challenges with data privacy, check out TechCrunch’s feature stories: