If content creators want to sell pricier monthly content subscriptions, offering stickers, pins, signed photos, or t-shirts can convince fans to pay a higher fee and keep them loyal with a physical connection. That’s why patronage platform Patreon just acquired Kit, a startup building a merchandise logistics backend so creators don’t have to fiddle with spreadsheets and stuff envelopes themselves.

“Over 60 percent of today of Patreon creators either want to or are already delivering some kind of physical merchandise” says Patreon’s VP of Product, Wyatt Jenkins. Together, they could help Patreon creators develop merch items that fans subscribe to get ahold of, potentially shelling out for $10 or $20 per month tiers rather than basic $1 or $5 online content-only tiers.

The deal could also help Patreon stay ahead of YouTube and Facebook, which are encroaching on its subscription patronage model. Patreon now has 2 million patrons backing 100,000 creators. It paid out $350 million over its first 5 years through 2017, and expects to send creators another $300 million in 2018, while taking a 5 percent cut.

Financial terms of the deal were not disclosed. 90 percent of Kit team, mostly product and engineering talent, will join San Francisco-based Patreon though they’ll stay put in NYC as a satellite office the rest of the year. Kit had raised $2.5 million from Social Capital, Expa, #Angels, Precursor, and Stanford’s StartX, as well as angels like Ellen Pao and Slack’s April Underwood.

“When we think about merch, it’s never been fully about the thing — the sticker or the t-shirt — there’s this relationship. This human-to-human connection” says Kit co-founder and CEO Camille Hearst. 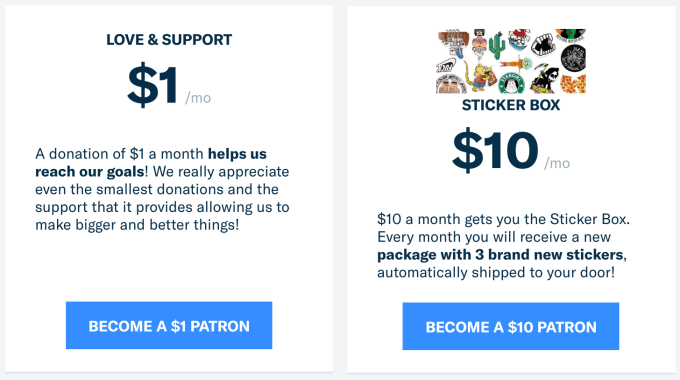 Kit was in the process of pivoting towards merchandise logistics and raising a Series A when it began talks with Patreon, leading to the acquisition. The startup was originally built as a way for social media stars and online celebrities to earn affilliate marketing fees by recommending products to fans through Kit, which took a cut of the referral dollars. Some creators showing off their “Kit” of camera equipment, sportswear, or caffeination supplies were earning tens of thousands of dollars.

“We were at a stage where everything was going in the right direction. We had seen strong growth in monthly active users and how much creators were making” Hearst says, noting Kit had reached $15 million in gross merchandise value. “It just seemed like we would be able to accelerate what we were doing by joining with Patreon. Merch is very transaction focused compared with a subscription.” Hearst explains, touting the high lifetime value of recurring payments over one-off purchases. “You can help creators earn a lot more money if you use merch to sell subscriptions.” 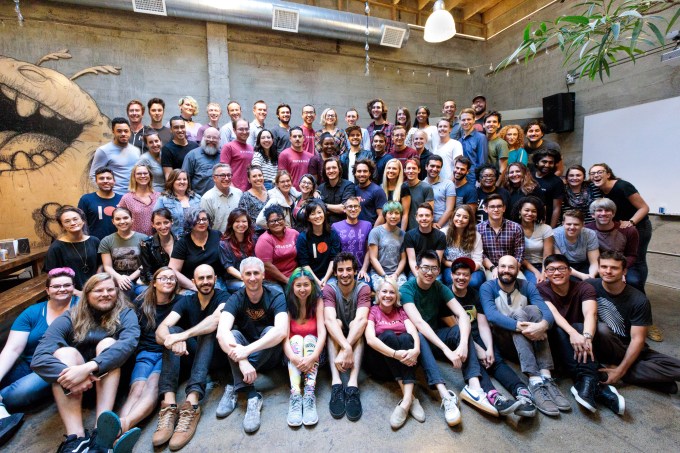 The plan at Patreon is to build out a new open merchandise provider platform. Creators will be able to choose between a variety of merch partners ranging from those that turn their existing logo into physical goods to those that will design items based on merely vague ideas from the star. But in the meantime, Kit won’t be shutting down or ditching its affilliate program because “we don’t want to turn off any revenue streams” that creators depend on, Hearst promises.

“Right now creators have to choose between different merch partners” without collective bargaining power or enoug data to know what works, says Jenkins. “We can have set pricing for all those merch partners that will be lower than they can get on their own”, while alleviating creators from having to juggle spreadsheets of who gets what and mailing it all themselves.

The plan for Patreon to monetize merch is a little less clear, though Jenkins says “We’re going to grow the pie and we want a piece of the growth.” The idea is that using Patreon’s merchandise platform will incur extra fees beyond the skimpy 5 percent it earns on subscriptions. If adding a merch item significantly boosts the subscriber number for a certain tier, Patreon will take a TBD cut. For comparsion, YouTube takes a much more hands-off approach, merely listing suggested merchandise partners to wrok with.

“We want creators to make a living. That’s not a side hustle. You have to make more money year over year, You have to be able to do things like buy a house or get healthcare” Jenkins concludes. “All the other platforms are ‘give us your content and we’ll give you a little side change’. That kind of led us down the mech path. Creators are were begging for merch.”